The Emily Alden Trilogy is available to buy wherever books are sold online. You can find the complete trilogy on Amazon in both paperback and Kindle editions. Click here to find all of my books on Amazon. Each book in the trilogy is sold individually but clearly marked as to which order to read them. 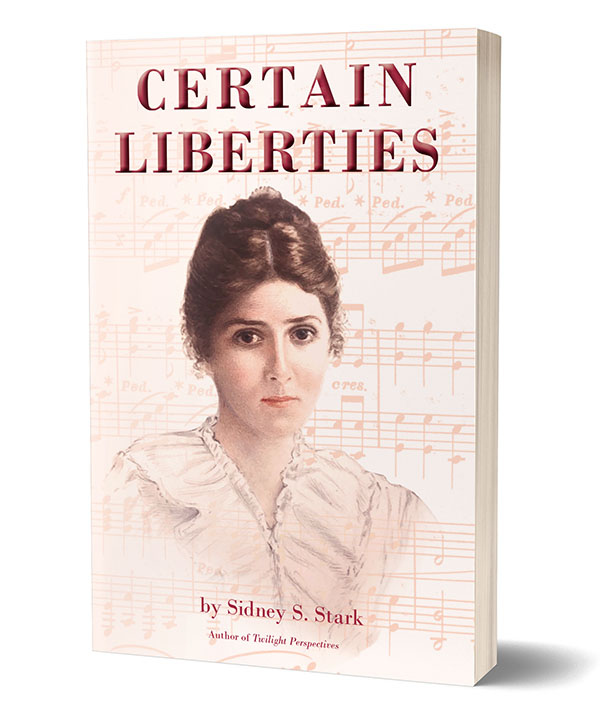 Certain Liberties is the first book in the Emily Alden Trilogy and a historical novel about a gifted young musician who defies nineteenth-century models of womanhood by trying to succeed in a man’s world. It was said that she had ‘male courage, feminine fortitude and the soul of an artist’. Challenging cultural bias against playing the ‘masculine’ violin and performing in public in an ‘unladylike position’, she incited censure for her views on everything from politics to the shackles of women’s underwear, only to find there were more serious threats to her personal freedom. Running from a life of prescribed expectations and a controlling father, she was recruited to work for the Underground Railroad, which she did to reunite with a cherished childhood friend. Only then did she learn about freedom in its literal sense, the most important part of the Founding Fathers’ Declaration of Independence, the right to life.

“In this historical novel set in the 19th century, a young woman of uncommon musical talent longs for the freedom that’s typically reserved for men . . . The author masterfully sets the historical stage—the United States as it devolves into the Civil War—and she addresses the issue of slavery with nuance and rigor . . . a riveting storyline. Emily is a delightfully complex mix of defiance and prudence, as she learns early in life that “there’s a very narrow line to negotiate between freedom and responsibility for women.” . . . Stark’s prose is reliably lucid and consistently faithful to the setting . . . An emotionally affecting and historically edifying tale.” —Kirkus Reviews

“As much a quick-paced mystery as social commentary, Stark’s novel captures and keeps the reader’s attention through memorable characters in historically well-researched settings, and adds her protagonist, Emily Alden, to a list of 19th century literary heroines like Elizabeth Bennet and Isabel Archer.”
—Denise B. Dailey, author of Listening to Pakistan, Riko: Seductions of an Artist, and Leaving Guanabara

“With a wealth of historical detail woven into an intriguing plot, Sidney Stark has written a wonderful novel…with a roster of lively characters headed by Emily Alden, a young female musician fighting for many freedoms denied to women of her time, including the right to perform in public. It’s a wonderful read…not to be missed.”
—Jia Kim, Artistic Director of Spruce Peak Chamber Music Society & Chamber Music Faculty at The Juilliard School and The Perlman Music Program. www.jiakimcello.com

“Certain Liberties is an emotional thriller…a page-turner coming-of-age adventure and romance…wrapped up in the social and historical context of nineteenth-century New York…the mosaic blend of characters reach out to the reader and reveal inventive resilience to overcome weights and challenges of life…Emily, Corey, and their sphere of family and friends remain memorable and inspiring…The thematic melodies strike a responsive chord…!”
—Paul Pitcoff, author of Cold War Secrets and Beyond the Foster Care System 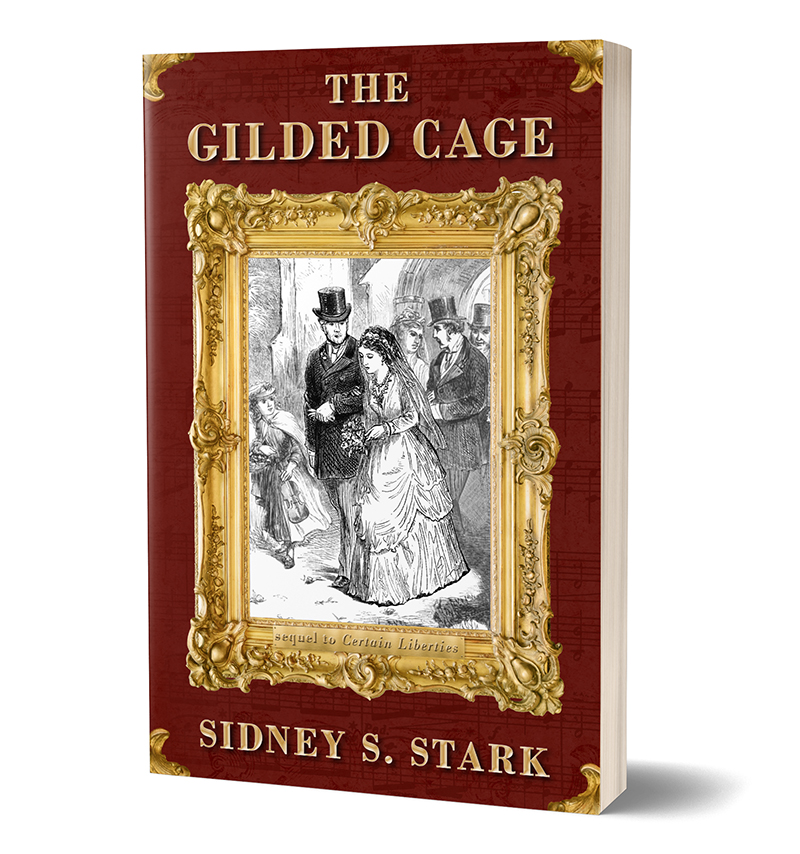 The Gilded Cage, sequel to Certain Liberties, is immersed in historical currents of the mid 1800s. An intense family saga with the same memorable characters, while introducing a few new ones, The Gilded Cage explores tensions of the post-Civil War Reconstruction North and South. The unrest of a young couple’s early-age marriage adds to the crushing pressures Emily and Corey must survive to excel as a parents, partners, and performers. Their struggle to live a “normal” life must endure betrayal, The Great Chicago Fire, and the Women’s Asylum on Blackwell’s Island. Survival, escape, and resilience unite in this portrait of a family and country emerging from War and the social turmoil that followed.This book also contains in-depth questions for group book discussions.

“Stark follows the fortunes of a talented violinist and her family into the tumults of Reconstruction in this sequel to Certain Liberties (2019)… As in the previous novel, Stark weaves her characters’ trajectories into the larger events of the time… Stark’s detailed recreation of the time period—culturally, linguistically, and philosophically—should please those who like nothing better than escaping into previous eras… Stark’s prose is elegant and ornate, evoking the Victorian novels that were popular during the time period… An unhurried and painterly novel of a musician finding her voice.” —Kirkus Reviews

“What a glorious accomplishment to have researched and written such a stunning book. I find the parallel of the Reconstruction and the final redirection/repurposing of Emily’s life’s journey wonderful…” —Nancy French Achenbach, President, Sag Harbor Historical Society. 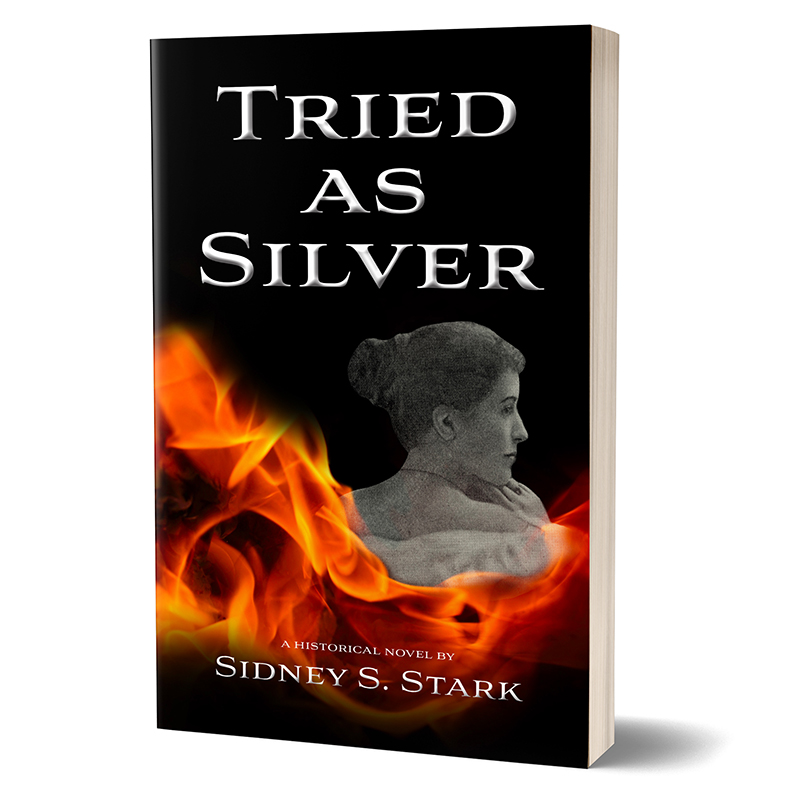 Tried As Silver is the third and final novel in the Emily Alden Trilogy about a female violinist who wants to run both her career and family simultaneously in the late nineteenth century. Moving from America to England, Emily faces issues parallel to twenty-first century challenges and finds unique ways of dealing with these universal trials from human history. Alongside a few new faces, historically-based figures from the first two books in the series rally around our protagonist as they support and challenge each other in Tried As Silver’s new setting of London, and the reimagined Royal College of Music. Orchestrating her life and those of the people closest to her becomes Emily’s primary goal as she moves through an unfamiliar time and place, always holding on to the things that steady her—the people she loves and her violin.

“Stark’s 19th-century violinist proceeds to London for her final act in this, the third in a trilogy of historical novels. After two decades in Paris, famed British-born American violinist Emily de Koningh (nee Alden) and her family are relocating to London …There is a new energy in London’s music scene, …where the Royal College of Music was recently founded to compete with the storied conservatories of the Continent. Are Emily’s prospects about to experience a similar renaissance, or is her fragile ensemble of friends, relatives, and lovers about to disband for good? Stark’s novel displays a depth of research and command of history.”
—Kirkus Reviews

“Emily Alden is a Nineteenth Century heroine battling the turbulence of society’s demands. A meticulously researched thriller, Tried as Silver roils with suspense as Emily, surrounded by actual and imagined characters from the Victorian age, redefines the meaning of family, parent, performer, and lover…a page turner causing readers to examine how their own lives are “tried” by the pressures of modern society. Much excitement as Emily maneuvers whatever life throws at her. Don’t miss this third book in the trilogy.”
—Paul Pitcoff, author of Cold War Secrets and Beyond the Foster Care System

“In Tried as Silver, Sidney Stark propels her polished historical fiction with the pace of a thriller, and completes her trilogy (Certain Liberties, The Gilded Cage) about the highly acclaimed virtuoso violinist, Emily Alden. Spanning the Victorian era, Emily struggles with the timeless and universal themes of managing family and profession. Notably, the author invites a solution as elegant and crafted as her language, her historical figures, and her dealing with the restrictive sexual mores. Stark, like Emily, finds her forte in music and musicians of the times.”
—Denise B. Dailey, author of Listening to Pakistan: A Woman’s Voice in a Veiled Land, Riko: Seductions of an Artist, and Leaving Guanabara

“Sidney Stark writes with passion and elegance in this impeccably researched novel, full of rich details and nuanced descriptions of this historical era. It’s a brilliant end to her superb trilogy as the wonderfully resilient Emily Alden discovers newfound joy and meaning in an art form most personal, intimate, and profound, called Chamber Music. It is a novel not to be missed, a story that immerses the reader completely!”
—Jia Kim, Artistic Director of Spruce Peak Chamber Music Society & Chamber Music Faculty at The Juilliard School and The Perlman Music Program

I’m loving it!! Emily is wonderful! Aunt Clara is perfectly annoying but I kinda like her…,[and] Professor Stanford! I’m really enjoying the book, it’s excellent! It was a total compelling read for me! Bravo or is it Brava?” —Eric Hensley

“Just finished your book. Really quite extraordinary. So grateful you wrote it.” —Virginia Stowe

Twilight Perspectives answers questions about how we repair when trauma messes up the lives we thought were neat and orderly. Suggesting ways to deal with the end we all ultimately face and life’s mysteries that seem unsolvable, this short compilation of essays moves from the initial helplessness and futility of watching someone close deal with an irrevocable death sentence, to become remarkably buoyant and upbeat messages of surviving and thriving. Their all-too-human author offers clues gathered from inside a life’s narrative arc; not only the one being lost, but also the one being found.